“Animated Cartoons Going Over Big” read the headline. The subhead added, “How Silly Symphonies and Mickey Mouse Hit the Up Grade.” So began a feature story in the New York Daily News, December 1, 1929, page 78. The story was written almost ninety years ago by Florabel Muir, a reporter who covered Hollywood and the underworld (she was once wounded in a gangland shooting while dining with mobster Mickey Cohen at a Los Angeles restaurant).

I think you’ll find excerpts from her coverage of this early stage of Walt’s career as fascinating as I do. When this edition of the Daily News hit the streets, Walt was just four days from his twenty-eighth birthday, and he was the head of a wildly successful animation studio. Mickey Mouse was an international sensation, with fourteen cartoons already released, and a fifteenth (“The Haunted House,” directed by Jack King) set to release the next day. The fifth entry in The Silly Symphonies (“The Merry Dwarfs” directed by Walt himself) would debut on December 19.

Here, then, are Florabel Muir’s insights into Walt, his team of animators, and his studio, along with Walt’s own reflections on his success:

Walt’s artists, Muir wrote, “gather together in a little unpretentious building on Hyperion Street, far from the cinema throngs, and turn out so much delightful nonsense that every picture company here is enviously trying to get some short sketches whipped into shape that will compete with the Disney creations.”

Muir observed that the Disney Studio in those early Hyperion days was, according to Walt, “a headless company.” She wrote:

“A crew of cartoonists and an orchestra working under the supervision of Walt Disney turn out the work while Walt looks out to see that the bills are paid and enough money rolls in to meet the payroll.

“ ‘Who’s the president or head of this concern?’ I asked.

“ ‘We haven’t any president or any other officers,’ Walt explained. ‘In fact, we are not even incorporated. I guess you couldn’t call us a company. We just get together, the bunch of us, and work things out. We voice our opinions and sometimes we have good old-fashioned scraps but in the end things get ironed out and we have something we’re all proud of.’ ”

Muir asked Walt how he got into the animation business, and Walt said he had originally wanted to draw editorial cartoons for a newspaper like the Chicago Tribune or the Kansas City Star.

“ ‘But I guess fate was against letting me be a successful cartoonist,’ he told me. ‘Gosh, how I used to envy the guys who were knocking out what looked like big jack in those days and I wondered if I could ever reach the top. I finally turned my eyes to Hollywood, where I decided I would go and try to become a director.’ . . .

“Success hasn’t made anybody high hat around the lot. They are one big family doing their stuff and having lots of fun. . . . The movie cartoons are drawn by a group of artists working over a glass board with a light underneath it. It takes about 5,000 different sketches for each of the [Silly Symphonies]. These are then reproduced on celluloid. . . .

“ ‘It is the rhythm that has appealed to the public,’ Walt told me. ‘The action flows along and we have to work hard to keep the movement flowing with the music. We had to work it out mathematically.

“ ‘We try to get something in the cartoon besides just nonsense. Some idea such as in the Silly Symphony where the idea of thousands of members of the animal kingdom preying on each other was carried out. We have to be careful not to get the sketches too silly.’

“It costs about $7,000 to make a Silly Symphony. The biggest expense is the salary of the artists. The orchestra varies in size from eight to twelve pieces. The director, Carl Stallings, has much to do with the successful enterprise. He writes all the scores. The scenario of one of the cartoons is written on sheets of music.

“ ‘Don’t ask me if we’re making money,’ Walt begged. ‘I wouldn’t know about that. I know we’re getting by all right. My brother turns up here each week with enough to pay everybody off. We haven’t found time yet to sit around and count our profits.

“’Everybody here has his shoulder to the wheel,’ Walt said. ‘Maybe some time we’ll all be rolling in wealth and move into more pretentious quarters and put on the high hat, but we won’t be making any better movies.’ ”

Walt was right about the wealth and “more pretentious quarters” the Disney Studio would acquire, but he was wrong when he said “we won’t be making any better movies.” Less than five years after making that claim, Walt committed his studio to the daunting artistic challenge of making the first full-length animated feature, Snow White and the Seven Dwarfs. And beyond that, over the misty horizon of animation’s future, lay Pinocchio, Fantasia, Dumbo, Bambi, and so much more. 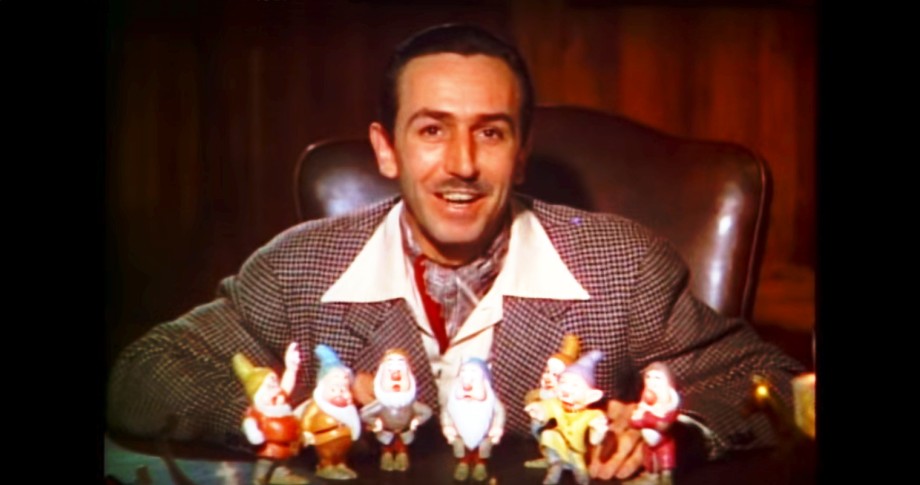 ABOUT JIM DENNEY AND WALT’S DISNEYLAND: Jim Denney has more than 120 books to his credit, and has co-written books with sports stars and Hollywood celebrities. His previous book on Walt Disney, How To Be Like Walt (co-written with Orlando Magic founder Pat Williams) has remained in print for a dozen years, and has garnered 4.8 out of 5 stars in 185 customer reviews on Amazon.com. Walt’s Disneyland: It’s Still There If You Know Where to Look by Jim Denney (Anaheim, CA: Writing in Overdrive Books, May 2017) is available at Amazon.com; Paperback $15.99; Ebook $5.99.

Walt’s Disneyland: It’s Still There If You Know Where to Look is NOW AVAILABLE for just:

After you read it, please do me a favor and write a customer review of the book. And if you have any questions or comments, feel free to write to me. My contact information is in the front of the book.

This site uses Akismet to reduce spam. Learn how your comment data is processed.