“Ray Bradbury and my father, Walt Disney, had a very special friendship—one of mutual admiration that began, of all places, in Bullocks Wilshire.”
—Diane Disney Miller

In March 2005, Ray Bradbury gave a talk at the Performing Arts Center in Duarte, east of Pasadena. After his talk, I went up and handed him my copy of The Martian Chronicles to sign. I told him I had co-written a biography of Walt Disney with NBA executive Pat Williams, who had interviewed Ray for the book.

“Oh, yes!” Ray said. “Your friend sent me a copy. Would you like to hear how I met Walt Disney?”

I knew the story—it was in the book—but what a treat to hear it from Ray himself!

“It was 1964,” Ray said. “I was Christmas shopping and I saw a man coming toward me, loaded with Christmas presents. I said, ‘That’s Walt Disney!’ I rushed up to him and said, ‘Mr. Disney?’ He said, ‘Yes?’ I said, ‘I’m Ray Bradbury, and I love your movies.’ He said, ‘Ray Bradbury! I know your books.’ I said, ‘Thank God!’ And he said, ‘Why?’ I said, ‘Because I’d like to take you to lunch sometime.’ And Walt said, ‘Tomorrow?’ Isn’t that beautiful? Not, ‘Next month.’ Or, ‘Someday.’ Tomorrow. Walt was spontaneous. The next day, I met him at his office and we had lunch—soup and sandwiches on an old card table. I told him how much I loved Disneyland, and he was thrilled to hear it.”

The official Disneyland origin story, as told by Walt himself, goes like this: “Disneyland really began when my two daughters were very young. Saturday was always Daddy’s Day, and I would take them to the merry-go-round and sit on a bench eating peanuts while they rode. And sitting there, alone, I felt there should be something built, some kind of family park where parents and children could have fun together.”

Is that true? Did Walt first dream of Disneyland while sitting on a bench in Griffith Park in the early 1940s?

Well, Disneyland was certainly on his mind in those days. His daughter, Diane Disney Miller, recalled, “We’d go to Griffith Park and play on the playground equipment and go on the merry-go-round for an hour or two or three. . . . Daddy never got impatient with us. He was just there enjoying us. Yet at the same time, he was analyzing what we were enjoying and why.”

Walt was thinking about Disneyland on that Griffith Park bench, but that’s not when the Disneyland notion occurred to him. In fact, he was making serious plans for the Park before he was even a father. A news feature in the Long Beach Independent-Press-Telegram, published July 15, 1955 (two days before Disneyland’s opening day) stated that files in Disney’s studio archives contained “original Disneyland sketches, bearing the 1932 date.” That’s a year before Walt’s first daughter, Diane, was born, and five years before the release of Snow White and the Seven Dwarfs.

In fact, Walt’s ambition to build Disneyland goes back even earlier, before the creation of Mickey Mouse. 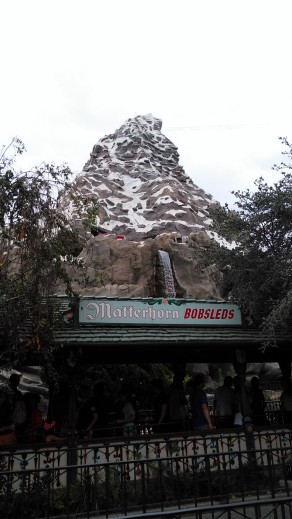 A few years after Disneyland opened in 1955, a Disneyland cast member noticed Walt Disney sitting on a park bench. He was looking off toward a patch of sky between Sleeping Beauty Castle and the Monsanto House of the Future.

She stopped and followed Walt’s line of sight. There was nothing to see but blue sky. “What are you looking at, Walt?”

“My mountain,” Walt said, pointing toward that patch of empty sky.

Where did Walt get the idea for building a mountain at Disneyland? The inspiration came from his childhood. In 1938, Walt wrote a letter to the Marceline News in which he reflected on the joys of growing up on a farm just outside of Marceline, Missouri. In that letter, he recalled, “What fun I used to have on winter days going down the hillsides lickety-split on a sled.”

How did a sled ride on a snowy hill in Missouri morph into a bobsled ride in the Swiss Alps?

Walt Disney was an unpretentious everyman, a farm boy from Missouri who happened to make motion pictures. His common touch enabled him to reach a broad cross-section of the American public. “I don’t pretend to know anything about art,” he once said. “I make pictures for entertainment, and then the professors tell me what they mean.”

Though humble and unassuming, Walt was a creative genius. The Disney Studio was a vibrant community of artists who elevated animated cartoons to amazing heights of artistry. Walt himself was the guiding, driving force behind every cartoon and animated feature. His art was pure, free of pretense and snobbery. He aimed his creations at the public, not the critics.

Fantasy writer Ray Bradbury says that the genius of Disneyland is its ability to make the surreal real. “I shall be indebted to Walt,” he once said, “for his ability to let me fly over midnight London in his Peter Pan ride.”

Yet the critics and the international arts community applauded his work during the 1930s and early ’40s. In 1937, surrealist painter Salvador Dalí journeyed to California, then wrote to his friend, poet André Breton, “I have come to Hollywood and am in contact with the three great American surrealists — the Marx Brothers, Cecil B. DeMille, and Walt Disney.”

After “Fantasia” and “Pinocchio” lost money in 1940, Walt lost his appetite for risk-taking. By the late 1940s, he was producing movies built on safe, proven formulas — animated anthology films like “The Three Caballeros” (1945) and “The Adventures of Ichabod and Mr. Toad” (1949), and hybrid animation-and-live-action films like “Song of the South” (1946). The arts community turned away from Walt, believing he had sold out to make “kiddie films.”

But Walt hadn’t sold out. Since the early 1930s, he’d been planning his boldest project of all. He was moving beyond the ink and paint of animation to a new medium of expression. On July 17, 1955, Walt unveiled an innovative form of three-dimensional art. Today, we call it a “theme park,” but it’s so much more than that.

Most people think of Walt Disney as a businessman who founded a company and hired other people to do all the creative work. Not true.

I have written two books on Walt Disney — How to Be like Walt (co-written with Orlando Magic exec Pat Williams) and Walt’s Disneyland. While researching these books, I discovered that the most creative person in the Disney organization was Walt himself. He was a fountain of ideas and imagination — yet he rarely gets credit for his creativity.

The reason Walt is thought of as a businessman rather than a creative genius is that he expressed his creativity through the medium of people — writers, artists, songwriters, directors, and Imagineers.

People mistakenly assume that Walt didn’t create anything himself. The truth is that most of the cartoons and feature films produced by the Disney studio began in the mind and soul of Walt himself.

He communicated his vision to his artists, and they carried it out.

The same is true of Disneyland. All the original attractions, as well as the hub-and-spoke layout of Disneyland, were fully formed in Walt’s imagination long before he told anyone about his dream.

During the weekend of September 26 and 27, 1953, Walt huddled with artist Herb Ryman at the Burbank studio. The two men worked for forty-eight hours without sleep.

Walt described his vision of Disneyland, and Ryman translated Walt’s words into a map, three feet tall and five feet wide, that the Disney Company used to pitch the Disneyland TV show to the networks.

The map Herb Ryman drew under Walt’s direction was amazingly close to the actual design of Disneyland when it opened on July 17, 1955. The only major difference was that the map showed Adventureland to the west of Main Street instead of the east. Disneyland was a fully-formed kingdom in Walt’s imagination long before Herb Ryman inked a single line.

(Continue reading at The Creative Penn.)

ABOUT JIM DENNEY AND WALT’S DISNEYLAND: Jim Denney has more than 120 books to his credit, and has co-written books with sports stars and Hollywood celebrities. His previous book on Walt Disney, How To Be Like Walt (co-written with Orlando Magic founder Pat Williams) has remained in print for a dozen years, and has garnered 4.8 out of 5 stars in 185 customer reviews on Amazon.com. Walt’s Disneyland: It’s Still There If You Know Where to Look by Jim Denney (Anaheim, CA: Writing in Overdrive Books, May 2017) is available at Amazon.com; Paperback $15.99; Ebook $5.99.

Walt’s Disneyland: It’s Still There If You Know Where to Look is NOW AVAILABLE for just:

After you read it, please do me a favor and write a customer review of the book. And if you have any questions or comments, feel free to write to me. My contact information is in the front of the book.

This site uses Akismet to reduce spam. Learn how your comment data is processed.